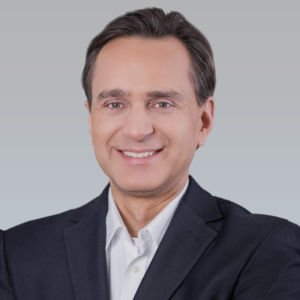 President of the Board, IAB Poland

President of the board and CEO of Interactive Advertising Bureau Poland since January 2013. Since October 2018 also Chairman of the Board of Directors at IAB Europe. Between 2013 and 2018 he was a member of the board of Związek Stowarzyszeń Rada Reklamy (Union of Associations Advertising Council). He joined IAB Poland after leaving Effectibi – an IT company he was the president and a co-founder of (2009-2013). Before that, he worked as a sales director at Atos Origin (2010-2011), as a managing director and a member of the board at Lothar Boehm (2007-2010), and as a managing director for CEE and a member of the board at Central Com PLS. His professional experience includes also holding senior management positions at Unicom Bols Group, AIG Amplico Life, and Kraft Foods. A graduate of Poznań University of Technology, of Poznań University of Economics and Business, and of INSEAD (finance, marketing, HR).