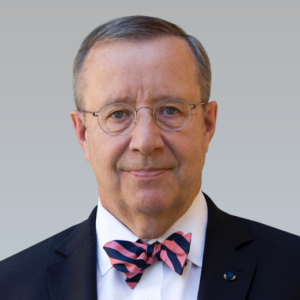 Former President of Estonia (2006-2016); Member of the Transatlantic Commission on Election Integrity

Toomas Hendrik Ilves, former president of Estonia (2006-2016) is a Berggruen Fellow at the Center for Advanced Study in the Behavioral Sciences, Distinguished Visiting Fellow at the Hoover Institution and the Global Digital Policy Incubator, Stanford University.

Before assuming the office of the presidency Ilves served as vice-president of the Foreign Affairs Committee of the European Parliament (2004-2006), foreign minister of Estonia (1996-2002), where he led Estonia’s EU and NATO accession process. From 1993-96 he served as Estonia’s first post-independence ambassador to Washington. From 1988 to 1993 Ilves was director of the Estonian Service at RFE-RL and prior to that a research analyst in the Research Department of RFE-RL.

He is best-known internationally for his work 1995-2016 pushing Estonia to digitize its government. He is currently writing a book on democracy in the digital era.

Ilves served as chairman of the EU Task Force on eHealth from 2011 to 2012 and was chairman of the European Cloud Partnership Steering Board at the invitation of the European Commission from 2012 to 2014. In 2013 he chaired the High-Level Panel on Global Internet Cooperation and Governance Mechanisms convened by ICANN. From 2014 to 2015 Ilves was the co-chair of the advisory panel of the World Bank's World Development Report 2016 "Digital Dividends" and was also the chair of World Economic Forum's Global Agenda Council on Cyber Security beginning in June 2014. Starting from 2016, Ilves co-chairs The World Economic Forum working group The Global Futures Council on Blockchain Technology.  In 2017 Ilves became an advisory council member of German Marshall Fund’s Alliance for Securing Democracy. Starting from 2018, Ilves is a member of the advisory board of the Oxford University Centre for Technology and Global Affairs.