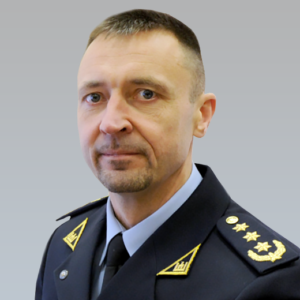 Col. R. Petkevičius graduated from the Military Academy in Riga, Latvia in 1990 with a degree in engineering. He joined the Lithuanian Air Force in 1992 and held various positions from Chief Engineer at First Airbase in Šiauliai, Lithuania to Chief of the A4 branch of the Lithuanian Air Force. In 2000, Col. Petkevičius was appointed Director of the NATO Department at the Ministry of National Defense of Lithuania. His responsibilities included interaction with NATO and national institutions in order to ensure Lithuania‘s preparation for NATO membership. Later in his carrier, Col. R. Petekvičius was appointed to the position of Defense, Military, Air and Naval Attaché to the United States and Canada. Next, Col. R. Petkevičius served as National Military Representative (NMR) of Lithuania to the Supreme Headquarters Allied Powers Europe (SHAPE). Before his latest assignment Col. R. Petkevičius held the position of Director of Lithuanian National Liaison Officer to NATO HQ SACT in Norfolk, VA.