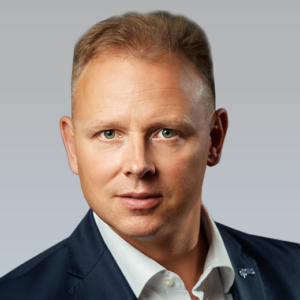 A graduate of the Military University of Technology in Warsaw - Cybernetics Faculty
1998-2008 Deputy Director of the Communication and Information Security Bureau in the Office of State Protection, and then Deputy Director of the ICT Security Department in the Internal Security Agency. Polish representative in the NATO Information Assurance Sub-Committee and working groups: Common Criteria, Interconnection of Networks and NATO PKI Advisory Cell.
2007-2008 delegated to act as deputy director of the Implementing Authority for European Programs responsible for the national implementation of the Schengen Information System (SIS) and the Visa Information System (VIS).
2008-2018 at Microsoft CEE HQ in Munich - Director of the National Security and Defense sector in the Central and Eastern Europe region, covering 23 countries, responsible for cybersecurity and implementation of new data processing technologies - including cloud computing.
Expert of the European Union Agency for Law Enforcement Training (CEPOL) on cybercrime and computer forensics.
From October 2018, returned to Government Administration to lead the Department of Cybersecurity at the Ministry of Digital Affairs in Poland, responsible for development of the National Cybersecurity System and establishment of the National Cybersecurity Certification System.