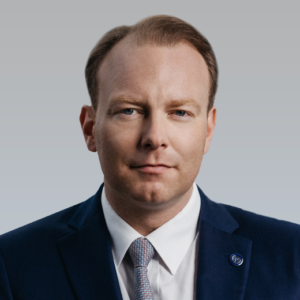 President of the Management Board, PZU SA

As CEO of PZU SA, Poland’s biggest insurance company with operations in five countries, he heads Central Eastern Europe’s biggest financial group. He is also Chairman of Pekao SA, Poland’s second biggest bank. Under his leadership, PZU has engaged in an ambitious new digital strategy which aims to transform one of Poland’s oldest and most established companies. Before joining PZU in 2016, he was head of corporate and investment banking in Germany of PKO Bank Polski, Poland’s biggest bank, in which capacity he set up PKO’s Frankfurt branch, the first polish corporate bank outside of Poland. He started his career with Merrill Lynch Bank of America in Paris where he was responsible for the biggest private and institutional clients from CEE. Though most of his career is linked to financial services, he spent two years in the automotive industry, following the call of his former client, the Boryszew Group, one of Poland’s biggest stock-listed industrial groups, to run the restructuring of its German automotive division as Member the Management Board. He is a CFA Charterholder, holds a Master in advanced studies of Ecole des Hautes Etudes Sociales (Paris), a Master of the Sorbonne Pantheon Paris I University, as well as BA in Philosophy of Hochschule fur Philosophie in Munich. Having lived, studied and worked in Poland, Germany and France he is fluent in four languages. He has been named Young Global Leader by the World Economic Forum. In 2019 Harvard Business Review ranked him one of the most effective managers of stock listed companies in Poland.