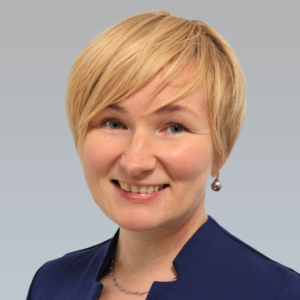 Ms. Kersti Piilma works as an advisor on cyber threats at the Estonian Ministry of Foreign Affairs’ Cyber Diplomacy Department.
Kersti has been contributing to strategic threat analysis since 2002 under the auspices of the Estonian Ministry of Defence. Proving strategic level situational awareness about wide scale of hybrid threats that target critical vulnerabilities, such as energy systems, logistical hubs and telecommunication systems has formulated the core of her activities also during the last four years – between 2015 and 2019 – at the European External Action Service (EEAS). Between 2016-2017, Kersti focused mainly on cyber threats emerging from wide-scale cyber information operations against democratic elections. Kersti was part of the team that prepared and provided inputs to the first cyber exercise at the EU ministerial level – the EU CYBRID 2017. She also contributed to the objective of the table-top cyber defence exercise to raise awareness of cybersecurity incidents at higher political levels. Over the last year at the EEAS, she coordinated a team of dedicated senior analysts responsible for providing situational awareness for reaching the goals of Common Security and Defence Policy within the European External Action Service.