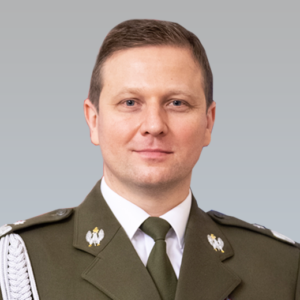 An IT security expert and an enthusiast with broad experience in the entire IT security field, specializing in cyber threat intelligence, computer forensics (GCFE), hunting targeted threats (APT) and security incident handling. A co-founder of one of the most advanced computer forensics labs in Poland, and probably in Europe. A graduate of the Military University of Technology and Warsaw Management University. From 2006 to 2019 he worked in the Military Counterintelligence Service and occupied positions including the Head of IT Security Branch, the Head of Computer Forensic Branch, the Head of Cyber Counterintelligence Branch, the Deputy Director of Cyber Security Bureau, and the Deputy Director of VI Directorate. In February 2019 he was assigned as the Plenipotentiary of the Minister of National Defence for the formation of Cyber Defence Forces. A month later he was promoted to the brigadier general rank and assigned as the Director of the National Cyber Security Centre. He has always been interested in creating and implementing innovative ideas and state-of-the-art technology.