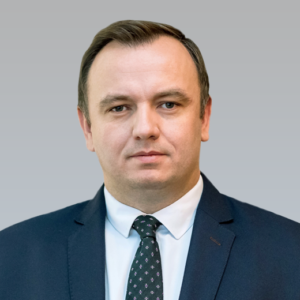 Born in Tychy on 7 April 1981. He completed postgraduate studies in management at the Collegium of Management and Finance at the Warsaw School of Economics in Warsaw, based on the structure of an MBA programme as well as postgraduate studies in European projects management at the University of Economics in Katowice at the Faculty of Finance and Insurance. He obtained his master’s degree at the College of Universal Knowledge Society in Warsaw at the Faculty of Social and Pedagogical Sciences in Katowice.
For many years he was professionally associated with a housing cooperative in Tychy, being responsible for marketing and development as well as broadly understood socio-cultural issues. He has held managerial positions in the financial sector, including that of the director for ownership supervision and director for strategic activity.
In 2010 and 2014 he was appointed a councillor of the city of Tychy. Initiator of, among others, the establishment of the Tychy Civic Budget. Member of the Public Finance Committee and the Local Initiatives and Spatial Order Committee.
In 2014, on behalf of the Tychy Our Little Homeland Association, he applied for the office of the mayor of Tychy, finishing second. In 2017 he joined the Law and Justice (PiS) councillors’ club. On behalf of the group, he stood in the elections to the Silesian Voivodeship Assembly, obtaining a mandate of a voivodeship councillor. He gained 33,315 votes. He served as the president of the Vistula Tourist Agency based in Tychy. On 21 November 2018 he took the office of the Marshal of the Silesian Voivodeship.