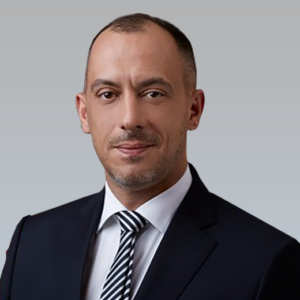 Ivica Ivanovic was born on December 3rd, 1974, in Podgorica, Montenegro. He attended elementary school in Podgorica, Montenegro, and graduated high school in the United States. Ivica Ivanovic graduated from the University of Central Oklahoma (USA) in 1999 where he earned Bachelor’s Degree in International Business and Trade. He received a Master of Arts Degree in Diplomacy and International Relations from the Seton Hall University “John C. Whitehead School of Diplomacy and International Relations” (New York, USA) in 2001.

• March 2017- Director General of Directorate for Defence Policy and planning, Ministry of Defence.

• May 2011 - May 2013 - Legal and Personnel Manager, Regional School of Public Administration (ReSPA), Montenegro.

• January 2006 - June 2007 - Personnel/HR Manager and Training Coordinator in the Municipal Management of Macedonian Schools, DAI, Washington, USA, based in Skopje, The Republic of North Macedonia.

Ivica Ivanovic has completed a number of additional education and training courses, including the following:

• The Lisbon Treaty and the Area of Freedom, Security and Justice and Participative Training Techniques, held in Regional School of Public Administration (ReSPA), Montenegro.

Ivica Ivanovic is one of the founders of the Association of Managers of Montenegro.

Ivica Ivanovic passed the professional exam for work in state bodies in 2010.