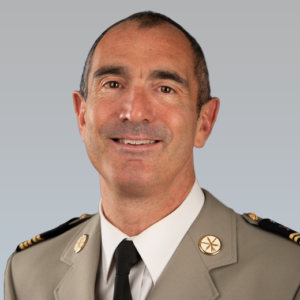 Colonel Pons is the Deputy Chief of the NATO Cyber Security Centre (NCSC) within the NATO Communications and Information Agency - the primary provider of ICT solutions and services for the Alliance
As deputy, he leads an integrated team of experts which provides a broad range of whole-lifecycle, cyber security services: from service design, through to implementation and operation of NATO’s cyber security defenses.
Colonel PONS has a 5 years university degree in microelectronic from Toulouse University and a master of network design and architecture from Paris Advanced Telecommunications School.
Colonel Pons has served for 28 years in the French Army. He started his career as an Artillery officer for 7 years in the 93rd Mountain Artillery regiment and for 3 years as instructor in the Artillery School. Graduated from the Command and Staff College, he joined the Joint Staff headquarters where he held several positions as Communication and Information System’s specialist. From 2010 until 2013, he served within NCSA, the predecessor of the NCI Agency.
Colonel Pons has also deployed for 6 months in 1999 as Observer for the European Community Monitoring Mission, in the Republic of North Macedonia and 6 months in Afghanistan in 2012 as Liaison Officer for the NCI Agency.
Colonel Pons is a knight of the Legion of Honor and knight of the National Order of Merit.