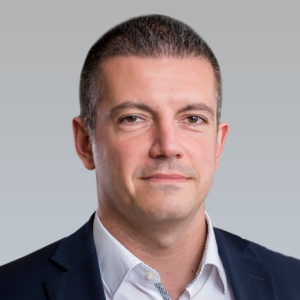 Damjan Manchevski is the Minister of Information Society and Administration since June 1, 2017.

Mr. Manchevski has over ten years of professional working experience in ICT sector, as manager and executive director of several companies. Between 2005 and 2006 he has worked as Engineer for Radio Frequencies in the Agency for Electronic Communications (AEC).

He has been elected as member of The Parliament of the Republic of North Macedonia on the Parliamentary elections in December 2016.

His vision as Minister of Information Society and Administration is to work together with ICT companies towards creating innovative solutions for strengthening the effectiveness of public policies and introducing new technological processes to increase productivity, making North Macedonia an example for the region regarding digital transformation. Together with his team, Mr. Manchevski will work on creating accountable and transparent public administration which will serve the citizens, through the re-establishment of the merit system and strengthening the training programs for the administrative servants. The public administration reform (PAR) will be conducted in an open, consultative process together with the civil society, trade unions, chambers and other relevant stakeholders.

Mr. Manchevski holds a degree from The Faculty of Electrical Engineering, under the University "Ss. Cyril and Methodius", at the Department for Electrical Engineering and Telecommunications. In 2009 he was a Chevening fellow at the University of Birmingham in the United Kingdom, obtaining a Certificate of graduate studies. In 2003 he participated in the US Department of State International Visitors Program titled "Young European Leaders and US Policies on Current Political, Economic and Social Issues," while from 2003 to 2004 participated in the School for Promising Politicians organized by the Friedrich Ebert Foundation and Alfred Moser. He is fluent in English and Serbian/Croatian language.