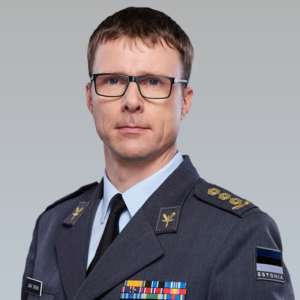 Colonel Jaak Tarien is the Director of the NATO Cooperative Cyber Defence Centre of Excellence (CCDCOE) based in Estonia since September 2018. CCDCOE is a NATO-accredited cyber defence hub focusing on research, training and exercises. The international military organisation based is a community of currently 21 nations providing a 360-degree look at cyber defence, with expertise in the areas of technology, strategy, operations and law. Prior to joining CCDCOE Colonel Tarien served as Commander of Estonian Air Force from August 2012 to July 2018. Among other assignments he has also served as Staff Officer with NATO's Supreme Allied Command Transformation (ACT), as Deputy Director of the Regional Airspace Surveillance Coordination Centre and as Commander of the Estonian team at the BALTNET Regional Airspace Surveillance Co-ordination Centre in Lithuania. Colonel Tarien, a graduate of the United States Air Force Academy, earned his Master’s degree from the Air Command and Staff College of the USAF Air University. He recently also acquired Master of Science degree in National Resource Strategy at the U.S. National Defence University.