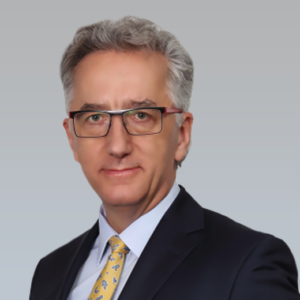 Chairman of the Board, Polish Chamber of Information Technology and Telecommunications

C-level executive and General Manager, highly experienced in managerial positions in high-tech and telecommunication industries with a proven track record in delivering transformation of merging corporations. Effective developer of domestic and international businesses, leader of multicultural highly performing sales teams, market influencer and industry activist. He started his professional career in telecommunication industry in 1984 in AT&T, then Lucent Technologies, Alcatel-Lucent and Nokia. From 2006 till 2018 he had been the CEO, President of the Board and Head of sales in Poland and Central and Eastern Europe in Alcatel Lucent. He is a PHD in Automation and has completed studies in management. Currently He is: - The President of the Polish Chamber of Information Technology and Telecommunications - Board Member of the European Federation of National Associations of ICT and Media Professionals; - Deputy Chairman of the Electronics and Telecommunication Committee in the Polish Academy of Science; - President of the Polish Association of Telecommunication Engineers; He had been: - the Chairman of the Council in the National Chamber of Commerce for Electronics and Telecommunications for six years - A member of the Scientific Council at the National Institute of Communications and - A member of the American and French Chambers of Commerce for numerous years For his contribution to the development of the telecommunication industry he has been granted the Golden Cross of Merit by the President of Poland in 2010. He had been as well honoured with the Golden Cyborg award.