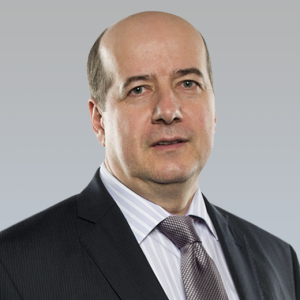 Ambassador Sorin Dumitru Ducaru is currently a Senior Fellow of the Hudson Institute in Washington DC and a Special Advisor to the Global Commission on the Stability of Cyberspace.

Ambassador Ducaru held the post of NATO Assistant Secretary General for Emerging Security Challenges from September 2013 to November 2017. In this capacity, he was the head of the Emerging Security Challenges Division at NATO-HQ, Chair of the Cyber Defence Committee and a coordinator and a manager NATO’s Science for Peace and Security Programme. He has provided expert input and chaired Allied negotiations on NATO’s Enhanced Policy on Cyber Defence, on NATO’s Cyber Defence Pledge and the Alliance’s Recognition of Cyberspace as Operational Domain. As Chair of NATO’s Cyber Defence Management Board, he was in charge of the NATO Cyber Action Plan implementation supervision.

Ambassador Ducaru was born on 22 June 1964, in Baia-Mare, Romania. He graduated from the Polytechnic Institute of Bucharest in 1988 with a BA Degree in Applied Electronics and Computer-Studies and from the Romanian National School of Political Studies and Public Administration in 1992, with a Post-Graduate Degree in Political Studies. He holds a MPhil Degree in International Relations from the University of Amsterdam (1993) and a PhD degree in International Economics from the Academy of Economic Studies in Bucharest (2005).

He joined the Romanian Ministry of Foreign Affairs in 1993, assuming various posts such: counsellor to the Minister, spokesman of the MFA, Director of the Minister’s Office and Director for NATO and Strategic Issues. From 2001 to 2006, he served as Romania’s Ambassador to the United States of America. In 2000–2001, Ambassador Ducaru served as Permanent Representative of Romania to the United Nations, in New York.

In the year 2008 Ambassador Ducaru was awarded the rank of Knight of the National Order “The Star of Romania”. He received the title of “Ambassador of the Year” in 2003 and 2012, from the Minister of Foreign Affairs of Romania.